Since 1969, every aspect of the monument industry has changed. The one thing that remains the same is Design Mart's commitment to you and the families you serve. Design Mart has been adapting and growing with you for 50 years.

From hand-drawn monuments to digital design, technology has changed, but Design Mart's mission is still the same: To help the retailer provide a personal memorial and the best service possible.

In 1969 the country anxiously watched as Neil Armstrong set foot on the moon. And in an old gasoline station in Elberton, Georgia, Design Mart was born.

Many things have changed since 1969, including the gas station location of Design Mart. While change occurs, commitment to quality is still the heart of what keeps Design Mart at the leading edge of the memorial marketing and sales industry.

As Design Mart grows and serves a new generation of memorial retailers more talent and space are required.  Today, in our new facility, Design Mart has a team of artists, web developers and support staff ready to serve you. 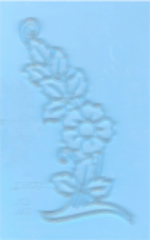 When Design Mart began, full-size pencil layouts on tracing paper, with chalk and carbon paper to transfer designs to stencil were high tech.

Next came plastic plates by 3M and others. These could be easily pressed into stencil, cutting it, so the sandblaster would pull the stencil and begin blasting and shaping.  With a wide selection of DMart designs on plastic punch plates, everyone could design and produce personal monuments, but no one had to be an artist. In the late 80s and early 90s all our designs were digitized, and our artists are available to create custom artwork as seen here. 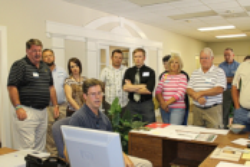 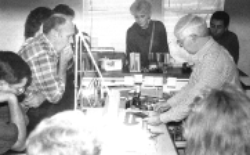 Design Mart believes in giving back to the monument industry. Each year we host the retail monument students who enrolled with the Elberton Granite Association. Retailers come from all over the United States to spend nearly a week in Elberton learning about granite, monument production, and sales. We have have been an EGA member since 1969, and we are proud to give back to these students who have traveled so far to improve their knowledge and make themselves the best retail memorialists they can be.

In the photo above, Joe Fernandez, founder of Design Mart, teaches one of the EGA’s retailer classes. This photo is from the late 70s or early 80s when monument images were still drawn by hand. Students were very interested in the many sketches, t-squares, curves, brushes, air brushes, and shades of ink required to make a design. At right, Mike Fernandez, who purchased Design Mart in the 90s, demonstrates the Online Monument Designer to another generation of memorialists. 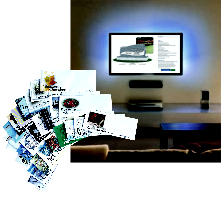 Our mission is simple: Provide the monument industry’s retailers with the materials and support they need to serve grieving families - providing a personal, meaningful memorial for generations to come.

Design prints, catalogs, and brochures were the norm until the 90s. That’s when web sites and digital design began to establish a foothold and forever change retail sales methods.

While Design Mart has sold more than 30 million brochures and 100,000+ catalogs, we remain at the leading edge of technology with the Online Monument Designer & Catalog. Selling and designing can be done in a sales room, cemetery, or home. All that’s needed is an internet connection.

Reaching more customers and growing your business doesn’t require a large budget. Simply put, families can’t purchase a monument from you unless they have heard of you. In the past, Yellow Pages and direct mail were the best ways to reach out to customers. Now it’s all about the web and social media. Design Mart has designed and continues to host hundreds of monument web sites. For those who already have web sites, we can connect our Legacy Online Catalog & Monument Designer to make browsing easier for the customer as well as the monument retailer.

Design Mart traces its roots back to 1920s when John Fernandez left Franco's dictatorship in Spain and arrived in Cuba. Soon after that, he took another voyage up the east coast and settled in Barre, Vermont where he worked in a growing granite industry. While in Barre, John worked for Jones Brothers, and was one of the craftsmen who created the well-known work at the center of downtown Barre. It was in Barre that he met and married Julia Pena before making their way south to Elberton, Georgia.

While two of their sons went into granite manufacturing, the other, Joe, went to work as an apprentice draftsman in several of Elberton's larger manufacturing companies. After working at Coggins Granite Industries and a stint in the US Army, he went to work for Ben Smith of Premier Designs where he perfected airbrush techniques that can be seen in all of DMart's early work. Joe opened Design Mart in 1969 in downtown Elberton and served the local industry with drafting services and realistic airbrushed renderings for manufacturer reps and retailers.

Design Mart's approach would be different from that of Premier Designs. Design firms had previously focused on individual photographically reproduced prints from a darkroom. Joe saw sales moving from a door-to-door task to one driven by targeted direct mail, and in 1969 started his own company - Design Mart. He compiled his design collections into brochures and matching sales books such as Precious Memories, A Closer Walk and Ties That Bind, which are still in demand today.

All Design Mart designs continue to carry unique identification numbers for monuments as well as components used to draw each monument. These numbers, coupled with a selection of alternate carvings in the back of each sales book make it possible for retailers and manufacturers to quickly customize monuments by number without guesswork.

The mid 1970s saw a revolution in the pre-cutting of rubber sandblast stencil for carving and lettering on monuments. Sandblast masks made of heavy rubber had long been used to sandblast lettering, panels and flowers on monuments. Rubber was glued to the face of the granite monument and an actual size drawing was traced onto the rubber. After transfer, a cutter used a knife to hand-cut over the pencil lines that were transferred to the stencil. Rubber was then removed to reveal the stone underneath, which would be sandblasted.

Working with John Gaspari of Pall Limited (later PMD) and 3M, Design Mart aided in the development of a thin layer of mylar between the rubber and backing. Design Mart furnished popular component designs (flowers and panels) to be produced in plastic stencil cutting "punch plates" that acted like cookie cutters when pressed into the stencil under great pressure. The plate would press through and cut the stencil, but the mylar backing would stay in place. This made it possible for stencil to be pulled (or weeded) in the studio and then taken into the plant for application to the stone without a worker having to cut stencil by hand after it was applied to the stone. Stencil presses and plates were popular throughout the late 80s and early 90s when CAD systems were first used to cut stencil. The component identification process lent itself to an easy transition into the cut-and-paste world of digital clip art.

In the early 90s Joe's son, Mike, returned to Elberton, and purchased Design Mart. By the mid 90s he had digitized many of Design Mart's popular design components that had been used as plastic plates. Complete monument designs formatted for CAD applications followed. Popular titles such as Precious Memories were the first to be digitized and led to the digitization of more than 25 different collections.

Companies such as Master Layout, Cochrans, Premier Designs and MonuCad all had their own collections that were sold with each system. Design Mart was the first company to offer CAD files in a variety of formats such as AI, EPS and DXF that were compatible with all CAD and illustration systems. For the first time, a company could use any established monument application as well as AutoCad, Illustrator, Corel and many others to open standard DMart designs and use them to cut sandblast stencil.

The mid 90s also led Design Mart to create many industry specific fonts in TrueType format such as Modified Roman, Condensed Roman and Vermarco. Users were no longer bound to a system with proprietary fonts such as Gerber or MonuCad.

The mid to late 90s also gave rise to email and websites. Manufacturers and retailers alike began ordering popular DMart CAD files by email. Design Mart created its first website and followed it with the creation of a site commissioned by the Elberton Granite Association. Today Design Mart hosts the third generation website for the EGA as well as hundreds of sites designed and built specifically for monument retailers.

After the year 2000 Design Mart created the industry's first click-and-drag monument design software, which ran from a CD and featured a basic selection of monument shapes, components, panels and fonts.

This was followed in 2006 by the online version of the Monument Designer, which allowed users to create colorful images of photo realistic monuments for sales presentations. All components were standards which made it easy for studio artists to build CAD files to match the images created by retailers. An online Catalog database was included in a subscription to the online Monument Designer and allowed users to search all DMart catalogs by monument or component number, family name or monument type and size.

In 2014 work began on Design Mart's new generation of online Monument Designer and Catalog. Several online design tools were on the market, but they only allowed the user to create an image of the monument. There was no CAD file created. Studio artists still had to create CAD files to match the monument portrayed in the image. Using Scalable Vector Graphics, Design Mart created a program that would render photo-realistic monument images while, at the same time, creating CAD files that were ready for stencil cutting.

How Memorial Day Got Its Start

As you would expect, there was much healing for our nation to do at the end of the war between the Confederate States and United States.  In fact, Confederate soldiers' grave plaques were inscribed in Latin, with Deo Vindice or God Will Vindicate.  Clearly, there would be deep wounds for generations to come.  Design Mart's Mike Fernandez is shown here explaining one of the plaques to a recent Elberton Granite Association class.

Originally know as Decoration Day, Memorial Day originated in the years following the war when families gathered to decorate the graves of fallen soldiers.  During the first celebration of Decoration Day more than 5,000 people decorated the graves of more than 20,000 Union and Confederate dead at Arlington cemetery.  This

event, in 1868, was inspired by many local celebrations in communities during the three years following the end of the war.

After World War I our nation began to remember those who had perished in all wars.  In 1966 President Johnson named Waterloo, New York, as the official birthplace of the celebration since they had made an annual event of it.  In 1971 Congress declared the last Monday in May to be Memorial Day.

The monument industry also works with families who have set Memorial Day as a goal for memorializing loved ones.  Many granite suppliers and retailers alike begin to get ready in Spring for the deadlines associated with Memorial Day deliveries.

Visit Us In Baltimore January 13-15

Please contact us to subscribe to our monthly e-newsletter, or to receive snail mail, when new products or services are available. We also have special discounts at times, so be sure to stay in touch!